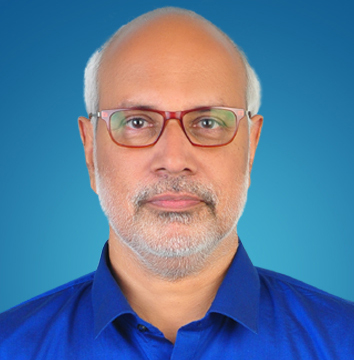 Ret. Professor at University of Calicut

Visit my Blog on Reading Capital of Marx at  https://mooladhanamvayana.blogspot.com/.

Programs Organised at the Department of Mathematics, University of Calicut.

1.Organized 4  workshops each of duration 3 weeks for third B.Sc. mathematics students under Mathematics Talent Search and Nurture Program sponsored by NBHM under DAE.

2.Organized as the Convener a Science Exhibition in connection with the 50th anniversary of the Kerala State at the University of Calicut.

4.Organized National seminars and National workshop in the Department of Mathematics.

UGC SPONSORED NATIONAL SEMINAR ON TOPOLOGY AND ITS APPLICATIONS AT

THE DEPARTMENT OF MATHEMATICS, UNIVERSITY OF CALICUT

Speakers and Title of the Invited Talks

The first lecture of this series will be on 19.4.17  from 10 a.m. to 1 p.m. in the Department of Mathematics Seminar Hall, university of Calicut. In this first lecture will be an introduction to set theory. The relevance of Set theory, Cantor and his work related to Set Theory and the basic concepts will be discussed on the first day.

Every Wednesday from 10 a.m. to 1 p.m. in the Department of Mathematics Seminar Hall, university of Calicut

19.4. 17 The First Lecture: This lecture will be elementary, starting with the definition of the sets. Set operations and the properties are then discussed.

General Mathematics Quiz on 29.9.16 at 9.45 a.m. at the Seminar Hall, Department of Mathematics

Demonstration Class on the use of Smart Board

A talk by Prof. V. Krishnakumar

Botanical Garden Visit by the students

28.01.2017 A batch of Students and faculty of Bishop Haber College, Trichy, Tamil Nadu visited the Department and Ramachandran P.T. delivered a talk for them on Calendar

22.12.2020 at 12 P.M. Madhyakala Kerala Ganitham ( Medieval Kerala Mathematics)  in the Webinar organised by KSCSTE in connection with the National Mathematics Day

22.12.2020 at  10 A.M. Pythagoras Theorem at the Webinar organised by Sree Maharshi Vidyalaya, Njangattiri in connection with the National Mathematics Day

3.3.2020 at 2.00 Mathematicians of Kerala at a Seminar Organised by the Dept. of Mathematics& Statistics, SNM College Maliankara

22.4.2016   2.00 p.m.   Cryptology  in the National Conference on Developing Scenario in Applied Sciences and Communicative English organised by the Department of  Science and Humanities, Kumaraguru College of Technology, Coimbatore on 21.4.16 and 22.4.16

23.6.2016   11.00 a.m.  On the Contributions of Mathematics to Astronomy with Special Reference to the Work of the Kerala School  in the Distinguished Lecture Series sponsored by KSCSTE at St. Albert's College, Ernakulam

23.8.2016 3.00 p.m. Mathematicians of Kerala, Department of Mathematics, University of Calicut

13.02.2015       Real Compact Spaces and Measurable Cardinals      in the National Seminar on Innovations in Mathematics  Avinashilingam University ( Avinashilingam Institute for Home Science and Higher Education for Women), Coimbatore from 12.03.2015 to 13.03.2015

18.08.2015  Delivered a talk on Pi and Kerala School of Mathematics at St. Joseph's College, Irinjalakuda

22.08.2015  10.45 a.m.to 12.00 p.m. Homogeneity and Rigidity of topological Spaces in the National Seminar on Recent Trends in Pure and Applied Mathematics organised by the Department of Mathematics, Shri Sakthikailassh Womens College, Military Road, Ammapet, Salem-636003 held on 22.8.2015

25.11.14   4.00 p.m. Mathematical Tradition of Medieval Kerala in the One Day Seminar on" Social History: Theories and Methods" organised by History research Forum, Dept. of History, University of Calicut

16.12.2014   12.00 noon  Inaugurated the National Week of Mathematics Celebrations  and delivered a talk on Contributions of Bhaskaracharya to Mathematics at Kendriya Vidyalaya No.1 Kozhikode

16.12.2013  Cryptography, in the One Day Seminar on Linear Algebra organised by Govt. College, Madappally, Vadakara, Kozhikode and Sponsored by D.C.E., Kerala.

3.2.2012  Delivered a talk on Digital Topology& Image Processing  at AICTE sponsored National Conference on Recent Trends in Advanced Mathematics Sponsored by AICTE at  Vidya Academy of Science and Technology, Thalakkottukara, Thrissur on 3.1.2012.

1.3.2012 to 2.3.2012 Attended the National Seminar organized by SCERT, Thiruvananthapuram  on â€œStrategies for Promoting  Mathematical Talentsâ€, delivered an invited talk on Nurturing Mathematical Talent: Theory,  Problems, Projects and Games  and participated in a panel discussion on components of mathematical talents.

13.12.12  An Invitation to the Number theory of Ramanujan in the National Seminar on Number Theory and Ramanujan's Contributions(NSNRC- 2012) December 13-14, 2012, Organised by the Department of Mathematics, University of Kerala

28.10.2011 at 1.30 The Ring of Continuous functions, in the UGC Sponsored National Seminar on New Perspectives in Modern Mathematics Organised by PG Department of Mathematics, Govt. Brennen College, Thalassery.

28.05.1988 10.45 a.m. Gave a talk on Lattice of Cech Closure Operators in the Symposium on Topology Chaired by Prof. V. Kannan in the Third Annual Conference of the Ramanujan Mathematical Soceity at M.I.T. Manipal. The other participants were Prof. M. Rajagopalan and Dr. Trivikraman.

24.3.2020 at 10.30 a.m. Inaugurated the one Day Seminar on Science and Pseudoscience in Contemporary Society organised by the Department of Mathematics, Govt. College, Thrithala and Sponsored by DCE, Govt. of Kerala  and delivered an invited talk on it

12.01.14 Delivered a talk on" Jyothisham Enna Thattippu" at a seminar organised by Yukthivadi Sangham at Tirur

10.11.2013 Participated as Moderator in the One Day Seminar on "Daivasthithwathinte Ullarakal Theedi" Organised by Palakkad District Committee of Yukthivadi Sangham at Town Hall, Palakkad

Participated in Instructional School and International Conference on Number Theory, PDE and Geometry from 24.8.2009 to 29.8.2009 at the Department of Mathematics, University of Calicut Sponsored by NBHM, CSIR, KSCSTE & ICCR

Participated in the Children's Science Congress at KVASU, Pookod, Waynad on 31.2.14 as a Panelist and interacted with students

The following are the three prizes instituted by me  in memory of my parents.

This is a prize instituted in memory of father P. Damodaran Nair ( former Head Master of  G.U.P. School  Kadungallur) to the best student G.U.P. School, Kadungallur in the 4th Standard.I was also a student of this school from 1st standard to 4th standard. The prize is Rs. 1001 only.This is given every year from 2003-04 onwards.

Distributed by Ramachandran P.T. in meeting at 7.15 p.m. in connection with the Annual Day on 2.3.2020 presided over by PTA President Kuttirayin

This is a General Knowledge Quiz competition for cash Prize is instituted in Ganapat U.P. School, Kizhisseri for the students of this school.The first prize is Rs. 1001/- , the second prize Rs. 501/- and the third prize id Rs. 301/-.All the students of the school  participates in this Mega Quiz Competition held in 3 or 4 rounds.The prizes are distributed in an appropriate function.This programme is conducted every year in collaboration with the school.

Prize distributed by Ramachandran P.T. 30.3.2020 in the Send Off Meeting and Annual Celebration at

The cash prize was distributed by me in a meeting held on 27.3.2013 in the evening in connection with the anniversary and the retirement of Ibrahim Kutty Master.

The prizes where distributed by Smt. Syamala, Asst. Educational Officer, Kizhissery  in a function in connection with the 61st anniversary and the send off to Smt. Sainaba Beevi Teacher on 28.3.14 at 4.00 P.M.

All who participated in the final round received Medals

3. P. Damodaran Nair Prize- 2015  to all the students ( Malayalam Medium) of GHSS Kuzhimanna getting A+ in all subjects in the SSLC Examination 2015

Cash distributed by Ramachandran P.T. on 15.6.15 at Sidra Auditorium, Kizhissery in a function to felicitate the students who passed SSLC and Plus 2 with good results. Sri, M.C. Muhammed, PTA President chaired the function.

P. Damodaran Nair Prize- 2016  to all the students ( Malayalam Medium) of GHSS Kuzhimanna getting A+ in all subjects in the SSLC Examination 2016

Cash distributed by Ramachandran P.T. on 20.6.16 at Sidra Auditorium, Kizhissery in a function to felicitate the students who passed SSLC and Plus 2 with good results. Sri. M.C. Muhammed, PTA President chaired the function inagurated by  Sri. P.K. Basheer M.L.A.

P. Damodaran Nair Prize- 2017  to all the students ( Malayalam Medium) of GHSS Kuzhimanna getting A+ in all subjects in the SSLC Examination 2017

P Damodaran Nair memorial intercollegiate Mathematics quiz competition. A team of 2 members from different colleges participated in the programme. Prof Anas E (Dept. Of Mathematics, MES College, Mampad) was the quiz master. Five teams out of twenty entered the final stage of the competition in which Shahid K and Dinkar NR came out as the winners. WMO College Muttil won the 2nd prize wheras Shamil and Mrudul of Farook College bagged the third prize. It was on 7th of March 2017 at U.G Seminar Hall.

I prize to the team from M.E.S College Mampad